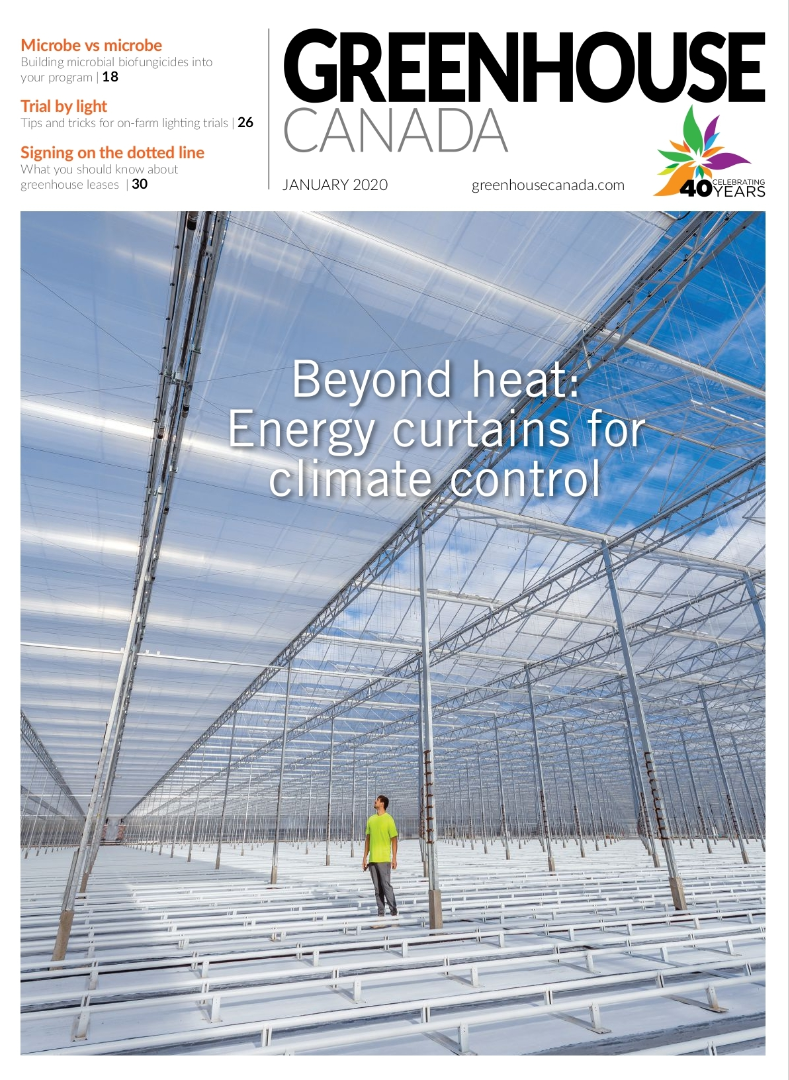 Even though natural gas prices are not extremely high right now in Canada, the Canadian climate makes energy curtains a must. They both conserve energy and provide a crop with more uniform temperature conditions, if used properly.

For many years in Ontario, every glass greenhouse and many poly houses have had at least one energy curtain in place, according to Shalin Khosla, greenhouse vegetable specialist with the Ontario Ministry of Agriculture, Food and Rural Affairs. In the last five years, more growers have been looking to install not one, but two curtains in their glass houses.

The first one is usually an energy curtain that provides about 25 to 35 per cent savings in heat, while the second is usually a partial energy curtain that acts as more of a shade curtain, which saves an additional 15 to 20 per cent in energy use, he explains. “It generally pays for itself in three to four years. The lighter ones can also be used for shading the crop.” Khosla notes that new curtains are more durable and provide better performance in terms of energy savings and light transmission. Some offer extra features such as ease of cleaning, allowing the transmission of moisture and prevention of dripping water.

In BC, Laura Bryce, an instructor at Kwantlen Polytechnic University in Langley and a former vegetable grower at a BC Village Farms operation, notes that energy curtains are a standard in any new construction. She adds that there is also merit in retrofitting older greenhouses with curtains, particularly operations with higher-value crops such as some cut flowers or vegetables and cannabis. Two screens are common in floriculture operations that require both photoperiodic control and shading. Being more sensitive to sunscald than other vegetable crops, bell pepper crops also commonly see the use of two screens, she explains, and they benefit from the thermal heat retention properties of the fabric during cooler temperatures. 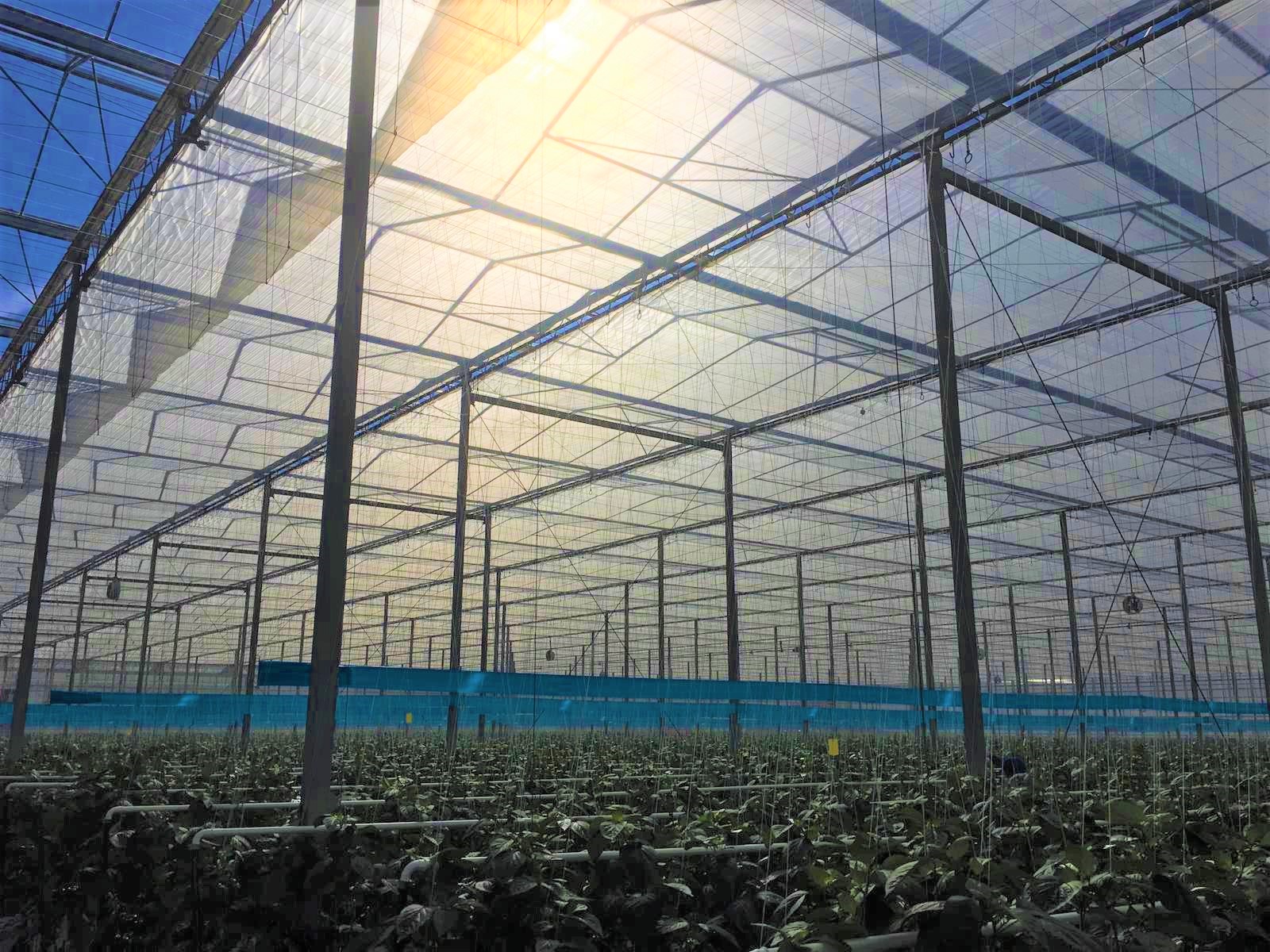 ABOVE With peppers being more sensitive to light, Allegro Acres has seen a greater need to use energy curtains in the early part of the year.

Gene Ingratta, owner of Allegro Acres in Kingsville, Ont., has been using two sets of energy curtains in the 12 acres of glass greenhouses he built in 2012 – this year for growing peppers and the last seven years for tomatoes. He chose to install two screens to conserve heat because natural gas prices were very high at the time. Working with Svensson, Ingratta went with a ‘Harmony’ curtain for more shading properties paired with the transparent ‘Luxous 1243’ for his second screen (formerly called ‘SLS10’).

Ingratta says his experience with the curtains “has always been great, but you learn a bit more every year about humidity control and opening and closing to avoid damaging the crop and the greenhouse.” Switching his glass house crop from tomatoes to peppers in January 2019, he found that the curtains were in greater need during the first two months of the year for light diffusion, as peppers are more sensitive to light than tomatoes and grow more slowly.

Because his SLS10 curtains are starting to show signs of wear, with dirt buildup and age beginning to limit light transmission, Ingratta plans to replace them in the near future with a set of Luxous 1147 FR. He says these curtains have good light transmission, as well as improved moisture permeability. They also provide energy savings of 47 per cent compared to having no curtains installed, Ingratta explains. With different ways in which they can be used, this model offers him the most flexibility for the type of weather conditions experienced in Kingsville. On colder days, the curtains can be left extended but still allow incoming light without losing heat. On a fairly warm spring day, the curtains can offer light shading without the rigidity of whitewash. As well, the curtains allow for more even humidity control in the greenhouse. 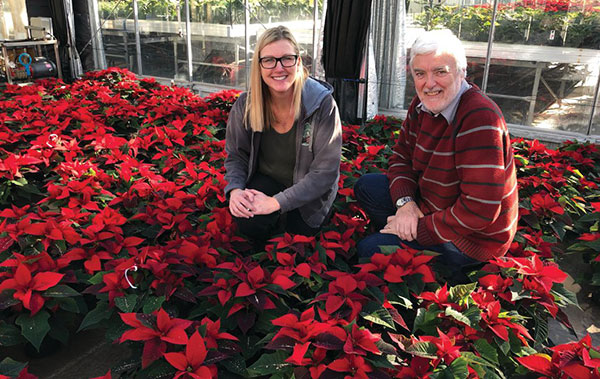 ABOVE Pictured with KPU’s Gary Jones [right], Laura Bryce [left] notes that energy curtains are standard for new construction in BC.

Research in the Netherlands

The energy savings offered by any given set of curtains are deter-mined by a number of properties. According to Esteban Baeza, a researcher in the Greenhouse Technology Group at Wageningen University & Research (WUR) in the Netherlands, these proper-ties include transmission and absorption of thermal radiation, as well as aerodynamic properties (mainly air permeability), which affect both the amount of heat lost by convection through the screen, and the amount of moisture it can transport by convection, diffusion and direct transport.

Baeza and his colleagues have developed standardized protocols to measure these physical properties and to also estimate their potential for energy savings. They used samples from energy-saving screens received from different companies and found very different values for the measured properties, which meant different potential values for energy savings. Screens with low emissivity provided the greatest energy savings. Baeza adds that “the highest energy-saving screens are also the ones with lower moisture transport, which has the consequence of increasing the humidity below the screen to (prob-ably) too high values. In such situations, growers open gaps in the screen closure to enhance moisture transport to the upper compartment above the screen, or use other types of dehumidification systems.”

It is important to note however, that condensation on the screens, which can occur in the winter when only one energy screen is used, can modify the screen’s physical properties – but he and his colleagues are not sure to what extent. “That is why we are now adapting the measurement protocols…and if required, corrections to the simulation models will be made to more accurately simulate the screen performance between fully dry and fully wet stages,” he says.

For the moment, there is no set norm that must be followed by companies in order to provide objective values of the relevant physical properties of screens, he says, so that customers can compare screen models with standardized measurements of their physical properties.

As with most tools, proper use of energy curtains will come with time and experience, but Khosla has a few pieces of advice. “Make sure you don’t open them too quickly or you will cold shock the crop,” he says. “Don’t delay in opening them in the morning or you will lose the benefit of morning sunlight, but at the same time, they should be closed in the afternoon if there isn’t strong [enough] sunlight in order to reduce heating costs.”

Bryce notes that research conducted in the Netherlands has shown that humidity inside can be managed more effectively by opening the lee and wind side vents together, without gapping the curtain. The alignment of lee and wind ventilation increases air circulation to remove excess moisture without disrupting the horizontal temperature distribution below the curtain. “This allows the newer, more permeable curtain fabrics to do some of the work of moisture reduction and [not] reduce potential for energy savings,” she explains. “I also think monitoring the temperature above the screen is very important in keeping temperatures stable, especially during active operation of the equipment opening and closing.”

Rob Hanifin, Svensson greenhouse climate consultant, says more and more vegetable growers in Canada are turning to transparent energy screens to help in their climate management. “As growers gain more experience with their screens, they also learn to use them as a tool for best climate management beyond just considering them as heat curtains,” he notes.

Hanifin believes that screens will continue to be engineered for greater transparency, and grower practices will evolve further with more creative screen use, using multiple screens to maximize energy savings and achieve better climate control.

Currently, Baeza and his colleagues are conducting various research projects involving new materials provided by companies, but it’s all confidential. He can report on another project, however, where he and his team have been able to identify a new material which combines low,
far-infrared radiation (FIR, a.k.a. thermal radiation) transmission and high visible light transmission with extremely low permeability to air but high permeability to water vapour. “This would allow for a rather large energy saving, the possibility to use these screens during daytime on dark days, and better control of humidity below them, perhaps preventing the need to open gaps or to use other dehumidification methods,” he explains. “These materials still need to be tested on the field, but simulations show promising results.”