What is Next Generation Growing?

Next Generation Growing (NGG) is a new form of controlled environment production that was born in the Netherlands in the last decade. The main objective of NGG is to optimize the growth of the plant through improvements in the conditions in the greenhouse and the reduction of energy costs.

The starting point of NGG is the natural behavior of the plants in relation to the growth environment, and refers to the technological innovation applied to greenhouses in which three main balances are sought:

In addition, NGG provides the tools for future innovations based on knowledge and experience, rather than trial and error.

Everything has to do with photosynthesis

Photosynthesis is the starting point to optimize the growth of plants. In the process of photosynthesis, CO₂ and water are photochemically transformed into assimilates or sugars and oxygen. These assimilates are the building blocks for growth and provide the energy to keep the biochemical processes inside the plant running. Therefore, the first step to ideal growth is an optimal production of assimilates. Furthermore, a maximum use of the PAR light available from the sun and/or artificial lighting.

Of course, there are limitations. Each type of plant has some maximum capacity of photosynthesis and evaporation. Forcing the plant to process high amounts of PAR light or to a higher rate of evaporation will cause damage to the crop. However, it has been shown for many types of plants, that the capacity of photosynthesis can be increased to much higher levels than is usually assumed by maintaining a high humidity level under high radiation conditions.

The energy balance is the balance between the flow of energy that enters and leaves the plants. Because plants do not have the capacity to produce heat, the energy balance consists of external energy sources of input and output. Examples:

Input energy: radiation, artificial horticultural lighting, heating pipes, convection by moving the warm air from the greenhouse to the leaves.

Plants can only evaporate if the energy supply is greater than the output energy and the water and energy balances are interconnected. Evaporation, by means of stomata, is the most important factor in cooling the plant in high radiation conditions.

The NGG research has revealed at least three important new approaches related to the energy balance of plants.

First, the fact that the activity of the plant or evaporation can be stimulated by the movement of air, because this air movement provides the input of heat by convection. In addition, the movement of air also prevents the creation of a stagnant microclimate.

Second, it has been shown that low air humidity or high humidity deficit cause unnecessary additional evaporation under high radiation conditions, which limits photosynthesis by stomata closing. 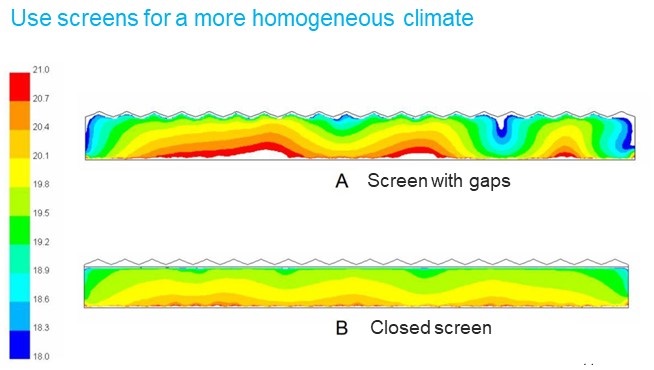 This article only explores the principles of Next Generation Growing

Contact us to learn more about NGG and find together how you can get more out of your greenhouse.

Third, it has been found that long-wave radiation or heat emission has a large negative impact on the energy balance of the plant at night, but also at the beginning and end of the day when the roof of the greenhouse is cold in comparison with the temperature of the plant. In this situation, the evaporation and, therefore, the absorption of vital nutrients, especially calcium, falls below the critical minimum value. This causes many different problems for the growth and development of the plant. Hence, it is highly recommended to keep a good energy screen closed during the night to reduce heat emission levels, and to maintain more controlled and homogeneous conditions that provide optimal absorption and evaporation for the crop.

The water balance is the balance between the intake and output of water from the plants. The water output is caused mainly by evaporation and only a small portion of the total water intake is stored in the plant and in the fruits. In practice, evaporation is mainly due to solar radiation and artificial lighting, and from heating pipes. If there is no radiation, the only source of energy is the heat transfer by convection caused by the movement of air. In that case, the evaporation also depends on the relative humidity and/or humidity deficit.

Plants must evaporate and, therefore, absorb water from the root zone for three reasons: absorption of nutrients, growth and cooling. To maintain the water balance in equilibrium, the uptake of water from the root zone must be at least equal to the rate of evaporation. Therefore, to ensure enough water availability, the irrigation must be in line with the evaporation energy received by the plant.

Avoid the loss of energy by long wave radiation by closing the screens. When the roof of the greenhouse is colder than the plants due to the loss of outgoing energy, the plants radiate heat towards the roof, decreasing the temperature of their leaves. This decreases the growth rate of the plants and the absorption of nutrients. When there is an optimal strategy of using screens and they cover the crop at the right time, the emission of heat is avoided to a large extent.

Place the screens without gaps to achieve a homogeneous climate. When there are gaps between screens, horizontal and vertical differences in temperature and humidity occur in the greenhouse. The fall of cold air causes disuniformity of temperature in the top and in the lower part of the crop. In addition, temperature differences will result in differences in relative humidity, resulting in local diseases due condensation, such as botrytis.

Ventilation above a closed screen for better moisture control. NGG research shows that ventilation above a closed screen can achieve better moisture control than increasing the minimum temperature of the heating tube. If the RH increases, it is better to increase the transference of water vapor through the screens than to increase the evaporation of the plants.

NGG has brought a true revolution to the use and management of screens. By using the right screens in the right way, it is possible to improve the growing conditions of the plant and save energy at the same time.