'Squeezing the orange' a little more

When it comes to maximizing natural light, our “cheapest” resource, new technological developments in the past few years have allowed growers to maximize Mother Nature’s free gift: the sun. With businesses today facing more competition, fine tuning and finding efficiencies is critical to our success. It’s about ‘squeezing the orange’ a little more. If we have the tools, we should ask ourselves, what are we waiting for?

A little extra light can make a big difference. Recent innovations have increased the transparency of energy saving screens for vegetable and ornamental crop production. The ability for higher light transmission further optimizes the growing climate while keeping the heat in, important during the colder seasons when vegetable prices typically peak. 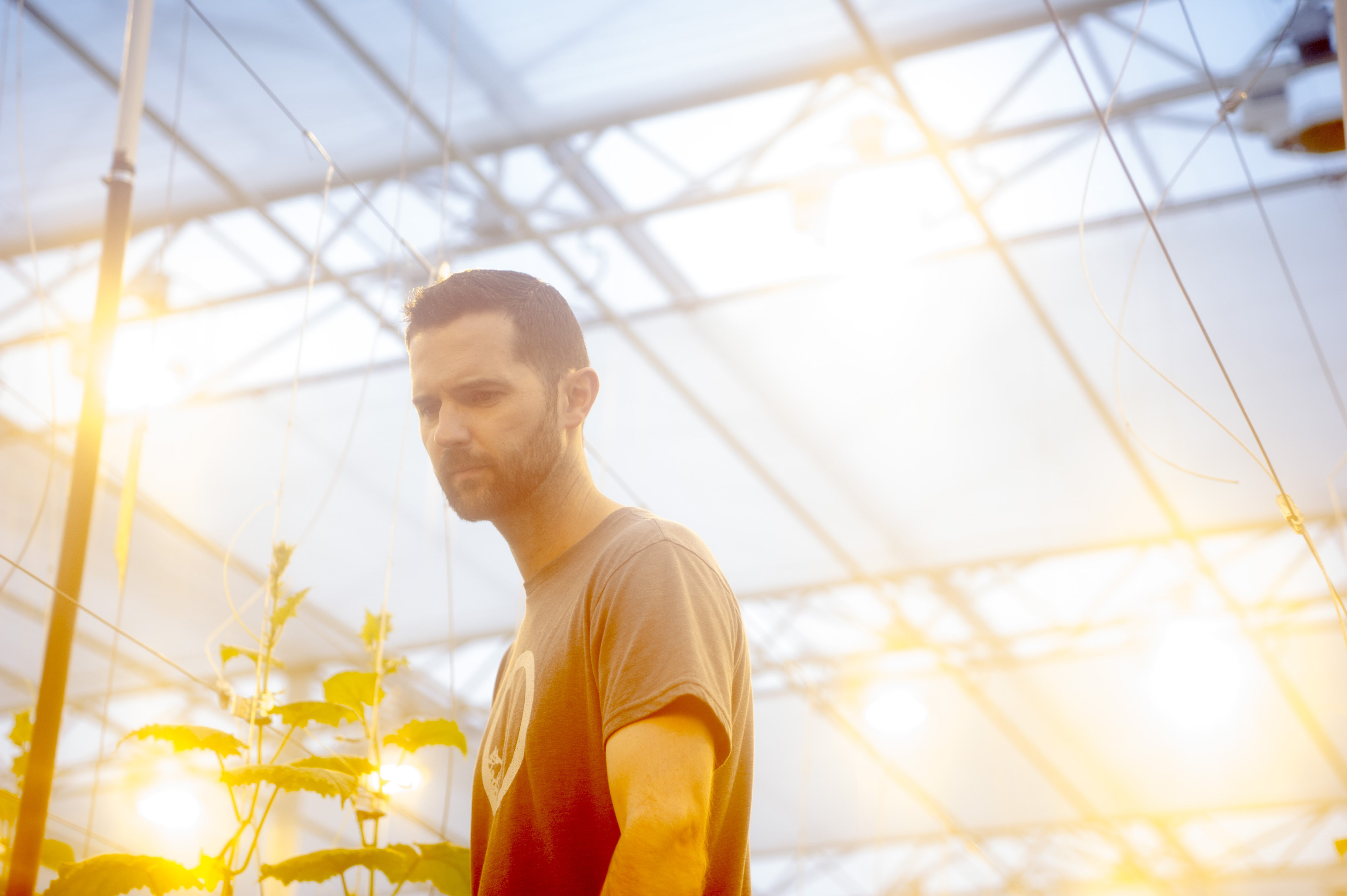 Ryan Cramer of Alberta’s Big Marble Farms looks to more light as one way of boasting his operations competitive advantage.

A little extra light can make a big difference. Recent innovations have increased the transparency of energy saving screens for vegetable and ornamental crop production. The ability for higher light transmission further optimizes the growing climate while keeping the heat in, important during the colder seasons when vegetable prices typically peak.

A greenhouse’s climate is a combination of temperature, humidity, light intensity and carbon dioxide levels. These elements are influenced by the conditions outdoors (temperature, humidity, radiation), the greenhouse structure and setup (ventilation, heating, screens, lighting, etc.), as well as the crop being grown (transpiration levels change as the crop matures). One of the big advantages of higher transparency screens is the ability to increase the number of screening hours. An increase in transparency not only lets in more sunlight, but allows the screen to be deployed for longer throughout the day without compromising on humidity, meaning higher potential for energy savings. In the winter, high transparency screens can be deployed even under low light levels, as the value of energy savings an outweigh the negligible amount of light lost. They can be open for shorter periods of time when radiation levels are higher, and closed when radiation levels lower again, saving energy night and day.

Alberta-based Big Marble Farms was the first greenhouse in North America to install Luxous 1147 FR, an energy screen that allows 89% of the sun’s radiation into the greenhouse. Used with supplemental lighting, the high transparency of this screen helps the vegetable greenhouse grow fresh produce year-round – even during the snowy winter months. When outside temperatures fall below 15ºC in darker months such as December, Big Marble typically closes the screen throughout the day to keep heat in. At night, the screen is usually kept closed to maximize energy savings.

Using screens with computers It’s no secret that energy is one of the highest operating costs to running a greenhouse. Fortunately, energy-efficient technology are rapidly revolutionizing the industry – be it more efficient boilers, better plastics and glass improvements, a more weather-sensitive computer or higher efficiency climate screens. And in some cases, improvements can cross-support different elements in the greenhouse, such as the integration of computers and climate screens. A computer that integrates more screening characteristics will give growers more precise control over the greenhouse climate. This increases their likelihood of saving energy, while producing better quality products and higher yields. 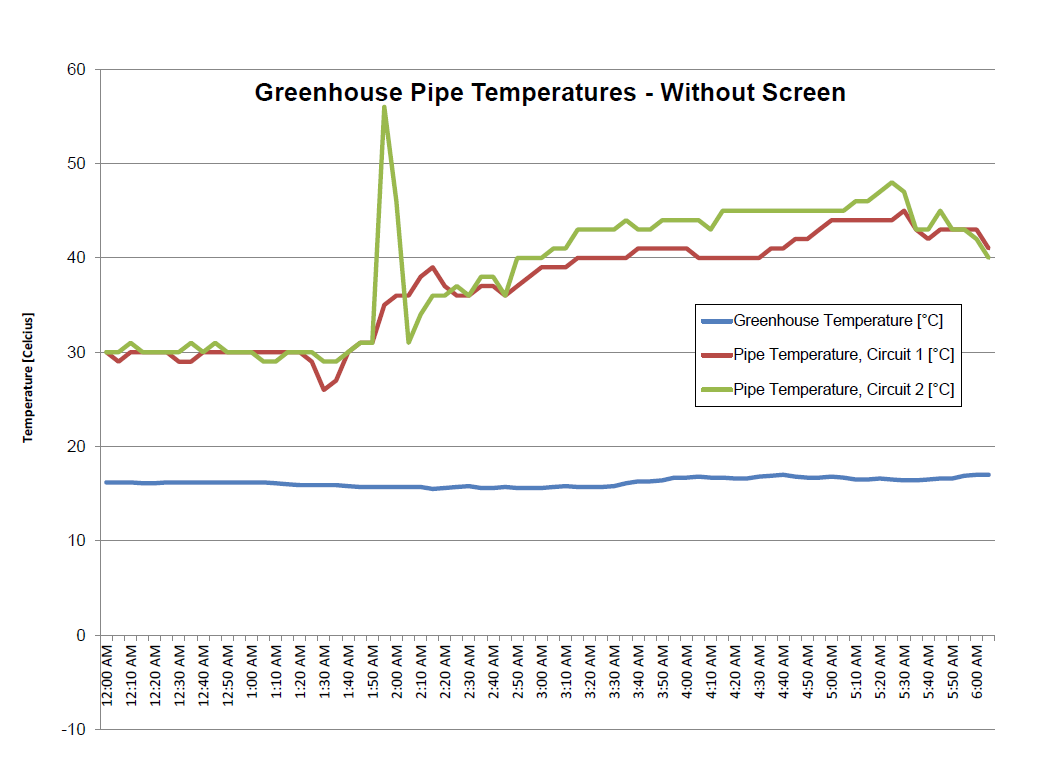 Figure 1: Greenhouse and pipe temperatures without the use of an energy screen.

Conversely, when a high-transparency energy screen is integrated with a greenhouse computer, the boiler has to work less to reach the same sub-20ºC greenhouse temperature (see Figure 2 below). In comparing these pipe temperatures to those when no screen was utilized, a clear difference can be observed as to how much less the boiler has to work to reach the same 20°C greenhouse temperature. Imagine this situation occurring daily for three or four months, and for those up north this can even extend out an extra month or two, which translates into a lot of money. 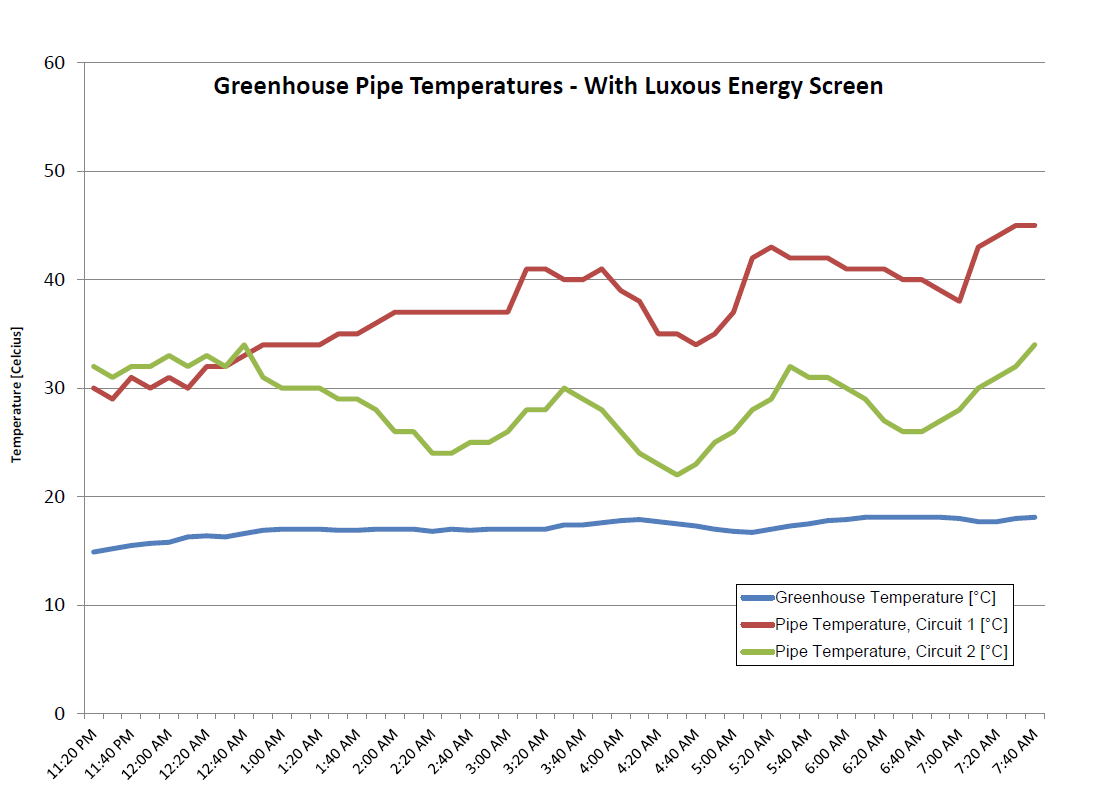 Energy screens can be a helpful tool in controlling the greenhouse climate, but the way they’re used should change depending on the situation, including large changes in outdoor conditions, peaks or dips in energy prices, or changes in market prices. Computers can be set such that screens are open or closed when certain solar radiation levels are reached during the day. Screen gaps can also be programmed to maintain relative humidity levels in the greenhouse.

When choosing a climate screen to help manage greenhouse conditions, it’s important to pick one that works for your needs. Are you leaning more towards energy savings or light transmission? Or perhaps you’re looking for cooling and shading in the summer? In some cases, double screen installations may be the right solution – doubling the ability to heat, cool and light on demand.

With businesses today facing more competition, finetuning and finding efficiencies is critical to our success. It’s about ‘squeezing the orange’ a little more. If we have the tools, we should ask ourselves, what are we waiting for?