In strawberry cultivation, there is a lot that can be achieved with climate screens

The process of choosing the right climate screens can often be complex as there are many different options available. How do you make the right selection? Just ask Strawberry grower, Jan van Genderen of Royal Berry, who made the right choice when it came to selecting the Luxous 1147 FR. Read about how the Luxous 1147 FR helps to get the ‘job done the right way’ when it comes to cultivating strawberries in a greenhouse.

The sky is hidden away by the clouds, with a barely visible watery sun. It is a gray day and not exactly the kind of day that has you thinking about climate screens. On a day like this, would you pull open a climate screen at 9:00 AM or not? KAS magazine asked this question to strawberry grower, Jan van Genderen of Royal Berry and Ton Habraken, Svensson's Climate Consultant. 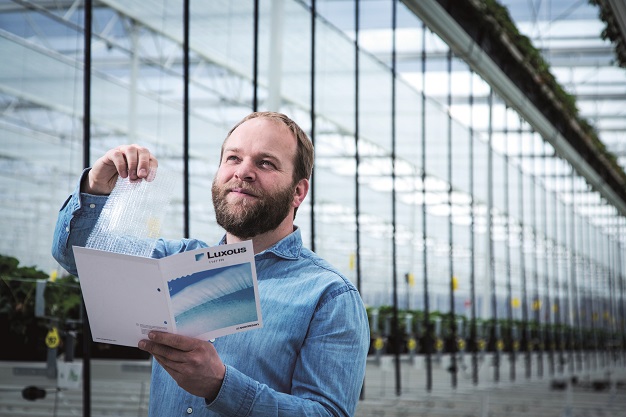 Jan van Genderen recalls when he first made the decision to install Svensson climate screens, “In 2017, we were really busy with six hectares of new construction in Bemmel. We were already a good ways into the process and I was honestly not waiting to have the hundredth conversation with a supplier at the time. But Ton was persistent and convinced me that they had the best climate and screen solution. So then, I invited him to meet with me and after hearing his arguments, I was completely sold!”

Ton: “To be clear, I am a consultant, not a buyer. I have been following strawberry cultivation for years and assist entrepreneurs who want to further refine their greenhouse climate by recommending the most suitable product. Our climate screens are divided into five product families—from extremely translucent to fully opaque darkening screens—and there are about 200 different products total. My role is to look at the specific greenhouse climate needed for optimal plant growth, and determine which specific screen solution will help growers to achieve this."

"The Luxous climate screen that Ton recommended let in five to ten percent more light and there were fewer issues with dirt."

What were the primary climate requirements needed?

Jan: “For me, it was all about two things: light and air flow. Light is the motor that drives photosynthesis. If that motor is running smoothly, then the strawberries also grow well. Light was 80% of the reason for me. The Luxous climate screen that Ton recommended let in five to ten percent more light and there were fewer issues with dirt. That was the deciding factor in choosing the Svensson climate screen.” Ton: “At the time, we had just developed the Luxous 1147 FR, an ultra-transparent energy saving screen with maximum light transmission. It’s a screen that is guaranteed not to wrinkle and the fibers used in the Luxous are hydrophobic and were specially developed for greenhouse cultivation.”

Jan: “In the past, when we rotated crops, we had to clean to the older screens. This kills the algae, but dead algae don’t become transparent. The dirt residue was still there. Technically, a screen can last for ten years, but in my experience, they need to be replaced in eight years because of the dirt build up.”

Climate screens for the future

Ton: “Strawberry cultivation in greenhouses and multitunnels is on the rise. In the year 2000, our country was growing 180 hectares of strawberries in greenhouses and multitunnels, but since then, the number has risen to 400 hectares. We are also seeing a greater diversity in growers. Some of them, considering the current price of gas, don’t find energy screens to be necessary. Some hardly bother with the greenhouse climate, while others are taking steps to change it.”

Jan: “Other growers who use heat—with a high gas consumption of up to 35m3— began using screens 25 years ago. Strawberries hover around 15m3 and are rarely screened. Having them open during the day is standard, because you have to utilize the benefits of light. However, the importance of climate screens is increasing. Fossil fuel use needs to be decreased: that’s the future.”

Why does the Luxous 1147 FR work well for strawberry greenhouses?

Ton: “This transparent, energy-efficient climate screen lets in a lot of light without compromising energy use.. It also is excellent at letting moisture in. This means that you don’t have to open and close it as much, because then you lose a lot of energy and the balance of the greenhouse climate is disrupted. The Luxous climate screen also restricts the heat radiation of the crops to the greenhouse deck.” 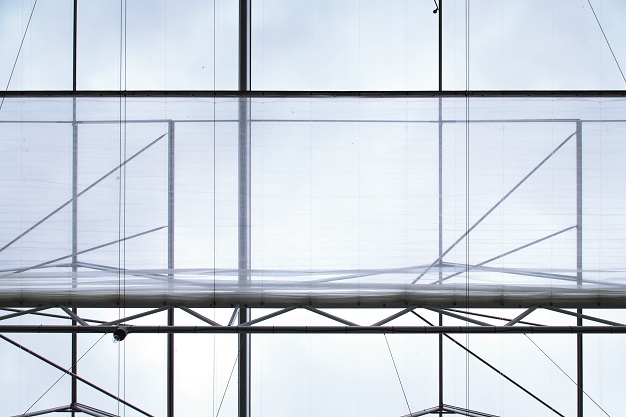 How do you choose the right climate screen?

Jan: “The internet, journals, expos, cultivation advisors, and colleagues. You talk with everyone and check out everything. You talk to installation experts too, but keep in mind they primarily have a knowledge of technical systems and lack the technical knowledge specific to your cultivation. They don’t know anything about your crop and that’s what it all hinges on. So, I feel like that is a shortcoming. I think it’s important that my staff has an in-depth understanding of the responsibilities that come with our new climate screens. We can definitely get even more out of them. Right now, we are going by standard practice, but we still have a lot we can learn about the greenhouse climate.”

Ton: I want to sit down with your staff and go over certain situations. My recommendation is to be cautious about stories on the internet. Specifically, it is very difficult to find independent comparisons. There are new measurement standards, but not all providers are working together on them. That is particularly challenging for us, because as a market leader, we are often ahead of the pack.” In closing, on this rather gray day..., we re-visit the question: “Do the screens need to be opened at 9:00 AM or not?”

In closing on this rather gray day, we revisit the question: "Do the screens need to be opened at 9:00 AM, or not?"

Ton: "Pfff... Tough question, because I am not in charge of the cultivation here."
Jan: "That's a decision that I would leave to my cultivation managers__the screens are open now. But, I also know that we make decisions based on our intuition and experience. And, those are not always the right decisions."