As developments in sustainable production continues energy screens play an increasingly important role with more and more greenhouse operations seeing the need to invest in climate screens. After data from the climate and screens are connected, production proves to become even more sustainable!

With projects like Next Generation Growing (NGG), the use of curtains in the greenhouseshave become increasingly more important and noticed in relation to climate control. Energy curtains are a leading component and an essential asset when it comes to greenhouse climate optimization.

Utilizing climate screens as a main tool to optimize climate has proven successful for brothers Wibo and Eqout Valster's Bell pepper operation, located in the Netherlands village of De Lier. Six months ago the operation installed Svensson's recently introduced and highly transparent Luxous 1147 FR energy screen over their peppers. "We did not buy the screen to save on gas, but to instead better optimize the climate. We chose the Luxous 1147 FR screen because it lets in more light, 2% more than its predecessor."

"We used our former screen for nine years before the time came that it needed to be replaced, and in practice Svensson measures that the new energy curtain is 1% less polluting than the old screen, so after nine years we should see at least a 10% reduction in light loss."

"When you first walk into the greenhouse, you do not notice that the screen is closed since there is so much light coming through," a visibly satisfied Valstar exclaims.

"In retrospect, we probably should have replaced our older screens a few years earlier," adds Valstar. Svensson Consultant Tom Habraken reassures Valstar telling him that he's seen operations with much older screens noting that under the 'Next Generation Growing" concept, the screens are closed more frequently throughout the day. And although you want to let in as much light as possible, you need to do so without making concessions to letting in humidity, saving energy and decreasing radiation." 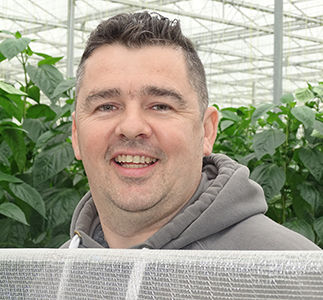 Energy conservation isn't what Valstar sees as the biggest benefit with the screen. "It's more important that you can prevent fungi like Fusarium, the ability to create a much better climate in the morning reduces such risks. This ultimately leads to better growth and increased production. First, we want to achieve growth by ventilating above the screen to reduce humidity levels. With this method compared to the more conventional method, you already save 25%!"

Physics plays a role in Next Generation Growing

In the case of tomato production, growers are becoming more interested in investing in screens. "Because of NGG we are looking at physics again and have found that some things are really different than we once thought," explains an enthusiastic Theo Ammerlaan of Themato, which is located in Berkel en Rodenrijs, Holland. Themato was the first company to cultivate in a closed greenhouse in the region. Since 2004, the company moves its surplus heat from a closed section into the soil, and during the night the heat is utilized via heat pumps. "Some 40% of our heat supply is solar energy. It's actually geothermal energy, only we deliver to retrieve from a rather superficial layer in the soil."

Last December Themato installed a new Luxous 1147 FR screen. "For years we used a mobile AC-plastic screen. In March, when the crop had grown tall, opening this screen caused a rain shower. This isn't very energy efficient because you have to go through the process of drying again. The Luxous 1147 FR curtain now gives us more control over the climate! Through air handling units, we can let in air to manage moisture better without having to ventilate. We are no longer adjusting the screens by hand like we used to do before installing the Luxous energy screen. With NGG, in regards to radiation, you monitor the temperature at the top of the plant, thus you can close the screen during most summer evenings and nights. In order to keep greenhouse temperatures from rising, part of the screen is kept open. The radiation of a plant makes an angle of 180 degrees, so that plants under the opening do not grow colder than the rest." 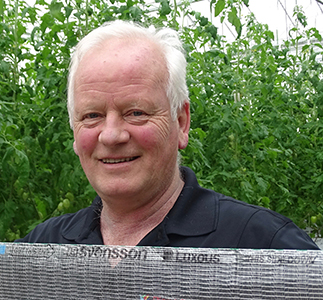 When to open and close the screen is by and large a gut feeling."You frequently have to walk over to the computer to adjust the temperature and light requirements for opening or closing the screen... But manually adjusting the position of the screen often has a negative effect on the desired climate in the greenhouse," Ammerlaan knowingly adds. Climate curtains create a better greenhouse climate, promote plant health and energy savings if they are fully closed," says Svensson's Habraken.

Svensson, in cooperation with Hoogendoorn is investigating this further in their joint Connected Screening project. The first step is to involve more characteristics of the screen when managing the greenhouse climate. It is important to know what the screen's effect is on letting light in, as well as its effects on humidity and radiation. More knowledge on the growth climate can influence more control and allow for more screening hours using fully closed screens. For instance, if the screen closes now, the greenhouse temperature rises 0, .-5 to 1 degrees. If you integrate this information, you can lower the temperature beforehand thus creating a more preventative and controlled method of climate management. This would make turblent growing periods much calmer and more managable.

Valstar is in support of the Connected Screening projet and would very much welcome the connection of all climate data in the greenhouse. "In the Spring we're always playing around a bit with the screen, for a few days in February it was very dark, we had one day where we only had 67 joules, which in retrospect I think was due to the screen being closed too much. When a computer can make calculations based on data input, you do not need to worry about having to frequently adjust the screen," explains Valstar.

Moving into the future, a climate computer must be a self-learning device. The screen likely would have been opened for a few hours during those darker February days, and in turn the temperature in the greenhouse would have been a little lower. Valstar already imagines that all data can be sent wirelessly to the computer as he begins to connect the dots, "I am not surprised if we, in five years from now, do not have cables in the greenhouse anymore."

When applying the Next Generation Growing method, the screen is closed more during the day. Svensson's Luxous 1147 FR lets in the maximum level of available light, without risking humidity buildup and still saves energy and decreases radiation. Overall, Ammerlaan was very pleased with the new screen, "Svensson's Luxous 1147 gives you a better control over the climate in your greenhouse."